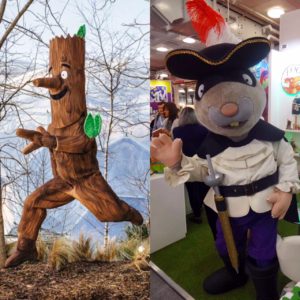 Stick Man and The Highway Rat are now on our character list.

Spring is finally in the air and we have two bank holidays AND May half term on the horizon, which means character events are in full swing.
In case you missed it we’ve also added some new characters to our roster in recent weeks. Little Miss Inventor and literary favourites Stick Man and The Highway Rat (pictured) are also now available to book for public events. Keep an eye out for them at a venue near you!
Here’s the eagerly awaited list of character events in May, which are subject to change as always. 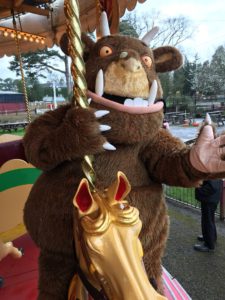 5th May: Popular duo Peppa Pig and George are heading to Great Central Railway today.
5th May: PAW Patrol’s Chase, Marshall and Rubble will be at B&Q in Farnborough.
5th May: Adventure Time’s Jake and Finn are at Queen Elizabeth Olympic Park.
5th & 6th May: Owlette and Catboy of PJ Masks fame will be at Dean Forest Railway.
5th & 6th May: Peter Rabbit is off to Animal farm in Burnham-on-Sea.
6th May: Paddington is heading up to Northern Ireland to meet fans at Glenarm Castle.
6th May: Skye and Rubble are booked to appear at White Post Farm in Nottinghamshire.
6th May: The other half of the PAW Patrol gang, Chase and Marshall, will be at Pontypool & Blaenavon Steam Railway.
7th May: Catboy and Owlette will be participating in a narration event at Crystal Peaks Shopping Centre in Sheffield.
7th May: Cheeky little pigs Peppa and George will be in North Shields at Royal Quays Outlet.
7th May: Drusilla’s Zoo Park will be hosting PAW Patrol’s Skye and Rubble.
7th May: Chase will be making a solo appearance at Woburn Safari Park in Milton Keynes.
7th May: The Gruffalo will be leaving the Dark Wood to appear at Thronton Hall in Skipton.
10th May: New character on the block, Little Miss Inventor, is at London’s Tate Museum today.
12th May: Shoppers at Fenwicks in Tunbridge Wells might be lucky enough to spot Peter Rabbit.
12th & 13th May: The ever-popular Chase and Marshall will be appearing at Animal Farm today.
12th & 13th May: Paddington will be spending this weekend at Bodin & Wenford Railway in Cornwall. 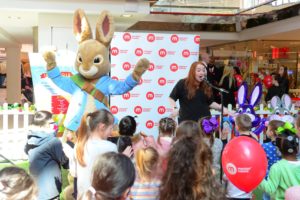 19th May: PJ Masks duo Owlette and Catboy will be heading to Old MacDonalds Farm.
20th May: The Gruffalo will be meeting fans at Colne Valley Railway in Essex.
24th May: Peppa Pig is booked to appear at Mothercare in Truro.
26th May: Peppa Pig will be appearing at Common People Festival in Southampton today.
26th May: Ben and Holly will be swapping the Little Kingdom for Flamingo Land.
26th & 27th May: Chase and Marshall will be at Bolton Abbey in Yorkshire to see fans.
27th May: Festival goers at Common People Festival, Southampton will be treated to appearances from Peter Rabbit today.
27th May: Meanwhile Common People Festival Oxford will have Paddington on site.
27th May: Skye and Marshall are heading to 4 Kingdoms Adventure Park in Hampshire.
28th May: Teenage Mutant Ninja Turtles will be keeping racegoers entertained at Huntingdon Racecourse.
28th May: Owlette and Catboy will be helping out with a narration at Cranmore Station in Somerset.
28th May: Skye will be appearing solo at Woburn Safari Park.
28th & 29th May: Paddington will be visiting yet another railway. This time it’s Bluebell Railway in Newick.
29th May: The Gruffalo is appearing at Camel Creek in Cornwall.
30th May: Octonauts Captain Barnacles and Kwazzi will be doing meet and greets at Crealys Devon.
30th May: Skye and Rubble round off a busy month at Palace Exchange in Enfield.
30th May: Peppa Pig continues to be popular with an appearance at Adventure Wonderland in Bournemouth. 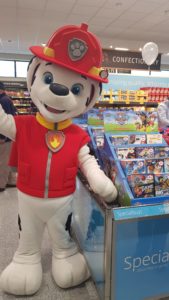