Adventure time characters are extremely popular with the children, as many parents and school teachers will know!

In fact, the fun nature of the animation and quirky humour makes the series popular with adults too!

It was first aired on Cartoon Network in 2010 and has since been a HUGE hit!

The series follows the main characters 17-year-old human boy, Finn, and his best friend Jake, a dog with magical powers that mean he change his shape, allowing him to grow and shrink. The pair live in the Land of Ooo and travel the land on their adventures! 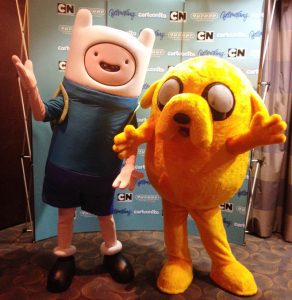 Finn is a 17-year old human boy who loves going on adventures and saving the day! He wears a hat that covers his long flowing yellow hair.

He is determined to be a hero one day!

Finn was abandoned by his parents as a baby and adopted by Jake the dog’s parents Joshua and Margaret.

Finn considers himself a hero and has a passion for adventure- sometimes this energy gets him into trouble though as he can be prone to fighting all the time in his efforts to save the day!

Jake is 28-years old in magical dog years and is Finn’s best friend. His parents adopted Finn, so they are brothers too!

Jake has a big heart and often joins Finn on his wannabe-heroic adventures!

Jake was bitten by a magical creature when he was younger meaning that he can now change his shape, grow larger and shrink to an incredibly small size.

He is a confident to the energetic Finn and has a much calmer temperament.

Other adventure time characters names from the Land Of Ooo

Princess Bubblegum is Finn’s secret crush! And, although she cares for Finn, unfortunately she doesn’t feel the same about him in the romantic sense!

She actually becomes quite an evil character throughout the series so it is probably best that the pair don’t get involved romantically!

She has a dodgy relationship with her father and is over a thousand years old, although she looks like a young adult!

The Ice King is 1043 years old and keeps stealing princesses throughout the land of Ooo to marry them by force.

The Ice King is lonely and misunderstood

The Ice King is lonely and misunderstood, and he is secretly envious of Finn and Jake for being such good friends.

A list of adventure time all the characters. These are the main characters and secondary characters in Adventure Time:

Other Adventure Time characters that sometimes feature in the series: 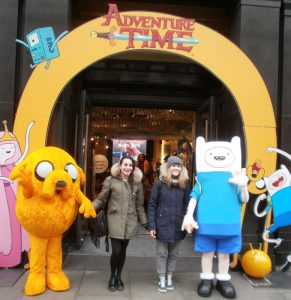