Secondary Target: Teens & adults that grew up with and loved the original show

These are the official Rise of the Teenage Mutant Ninja Turtles licensed characters.

CHARACTER PROFILE FOR Rise of the Teenage Mutant Ninja Turtles

Rise up! Join the legendary heroes, Raph, Leo, Donnie and Mikey as they discover a Hidden City beneath New York, learn amazing mystic ninja skills, battle absurd mutants… and always find time for a slice of their favourite pizza!

Mikey wears an orange mask and is the youngest of the four Turtles.  He has a fun-loving, wild and colourful personality. He is an artist and an eternal optimist and kicks total butt at ninjutsu with his flaming kusari-fundo!

Donnie wears a purple mask and is the tech wiz of the group. He uses his mechanical genius to construct a series of amazing battle shells and uses his transforming tech-bo staff and robotic drone S.H.E.L.L.D.O.N. to take on any foe.

Leonardo wears a blue mask and likes to think of himself as the “cool guy” on the team. He is intelligent and hilarious and uses his quick-witted skills to beat opponents, clear obstacles, or land one of his many one-liners.

Raph wears a red mask and, as the biggest and oldest brother, is the leader of the group.  He thinks he can use his fists to get himself out of any situation, but while Raph’s muscles may be bigger than his brain, his heart is even bigger and always tries his best to save the day. 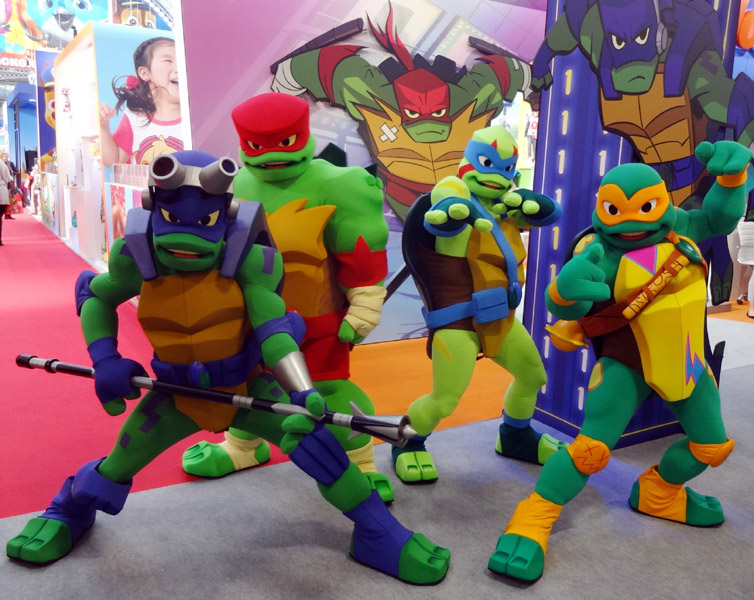 Secondary Target: Teens & adults that grew up with and loved the original show