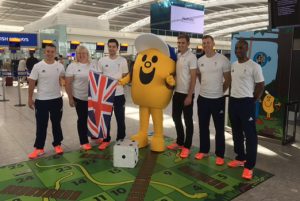 New character, Mr. Adventure, is unveiled during a visit to Heathrow airport.

August will see Rainbow Productions continue to manage a series of personal appearances of the new Mr. Men and Little Miss character, Mr. Adventure, across terminals at London Heathrow Airport.  The character was unveiled at the airport in July [pictured], as part of a collaboration between Sanrio and airport operator, BAA.

Working in partnership with host centres and the licensor, brand activations are also taking place this month across intu shopping centres; Rainbow Productions helping deliver this brand and character experience.

Live events this summer have witnessed licensed children’s characters attending family-orientated festivals across the UK.  Examples of destinations already seeing include Summer Sessions at Chiswick House, Big Day Out, Blue Dot at Jodrell Bank, Camp Bestival and CarFest North.  Festivals in the pipeline for this month, where Rainbow will again be managing the presence of licensed characters, include The Victorious Festival and Gloworm Festival in Nottinghamshire.

And not forgetting the Bank Holiday Weekend at the end of August which is set to see licensed characters seeing thousands of families at events across the UK!

Here’s a selection of character appearances scheduled to take place in August. All listings are subject to potential last-minute changes in characters and venues.

August 2: Woodlands Theme Park in South Devon will receive a visit from Turtles Leo and Raph.

August 3: Leo and Raph will be at Drusillas Zoo Park in East Sussex.

August 6: Feethams Leisure Scheme in Darlington has organised for Ice Age characters Sid and Scrat to visit.  On August 20 the same location hosts a visit from PAW Patrol’s Chase and Marshall.

August 9: Raph and Leo will be at Camel Creek in Cornwall.

August 9: Paddington will be visiting the Quadrant Shopping Centre in Swansea.

August 9 & 10: Peppa Pig is going to Finkley Down Farm Park in Andover.

August 10: Sid and Scrat will be seeing shoppers at Cascades in Portsmouth.

August 10: Paddington will be making appearances at the Octagon Shopping Centre in Burton-on-Trent, Staffordshire.

August 10: The Spires Shopping Centre in Barnet has arranged for narrations with PAW Patrol’s Chase and Marshall.

August 12: The Gruffalo will be at Nottingham Racecourse.

August 13: Today Newmarket Racecourse hosts a visit from The Gruffalo.

August 15: The Alnwick Garden in Northumberland is hosting a visit from Chase and Marshall.

August 17: Bing and Flop are going to Drusillas Zoo Park in East Sussex.

August 17: Fireman Sam can be seen at Finkley Down Farm Park today.

August 19: Scrat from Ice Age will be present at Greenwich Shopping Park at selected times.

August 21: The Mid Counties Co-op has arranged for separate appearances of Peppa Pig plus Chase & Marshall during a family day being organised in Gloucestershire.

August 26 & 27: The Big Feastival in Chipping Norton will include appearances by the Twirlywoos.

August 27 & 28: The Victorious Festival takes place in Southsea, Portsmouth on these dates and at various times and days the line-up includes Fireman Sam mini shows, plus personal appearances by Mim-Mim, The Gruffalo and the Twirlywoos.

August 28: Rand Farm Park in Lincolnshire is hosting a visit by Chase and Marshall from PAW Patrol.

August 29: The Gruffalo heads to The Broadwalk Centre in Edgware today.

August 29: Festival Place Shopping Centre in Basingstoke will be visited by Great BigHoo and Toodloo.

August 29: Shaun the Sheep will attend to his flock of fans during a visit to Alnwick Gardens.

August 29: Woburn Safari Park in Milton Keynes has arranged for Peppa Pig to come and see their guests.

August 31: Ben and Holly are making appearances at The Hop Farm Country Park in Kent.

August 31: The Gruffalo will be making personal appearances at Adventure Wonderland in Bournemouth.