THE SNOWMAN™ AND THE SNOWDOG JOIN SHOPPERS AT WHITE LION WALK 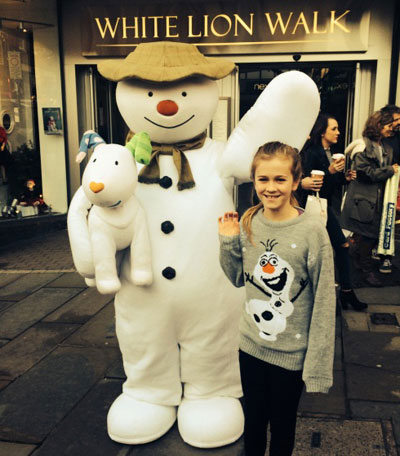 During the Saturday on one of the busiest shopping weekends of the year – immediately after ‘Black Friday’ – the White Lion Walk Shopping Centre in Guildford received a visit from The Snowman and The Snowdog.

The popular duo headed to the shopping centre on Saturday 29 November, meeting over 350 children during their time at the mall. The Snowman and The Snowdog also posed for photographs with shoppers and helped spread even more festive cheer.

“We were delighted to host The Snowman and The Snowdog in the centre.  Both the original and the 30th anniversary films are such family classics and really bring a magical feeling to Christmas.  It was fantastic to see our younger shoppers’ reactions when they met the characters for the first time and it was a great way to kick start the festive shopping period in the centre”.

November has seen the duo make a number of guest appearances at venues across the UK, including a visit to intu Trafford in Manchester, several Thornton’s retail outlets as well as Waterstones book store in London Piccadilly.

In December, The Snowman and The Snowdog will also see fans at locations including Selfridges Department Store in Manchester, Tesco Extra in Solihull, London Heathrow airport and Bunn Leisure holiday destination.

Find out more about The Snowman and The Snowdog attending events.