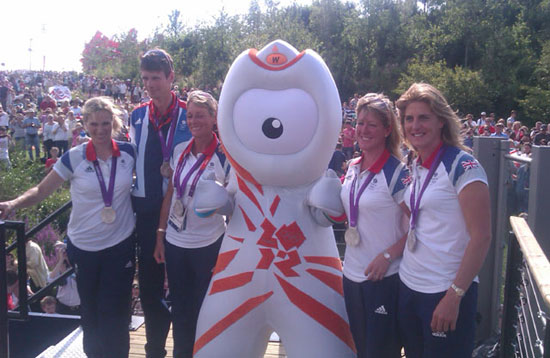 The 10th Annual General Meeting of the Association of Amusement and Leisure Equipment Suppliers of the United Kingdom (ALES-UK) took place at the Hindlip Suite, Sixways Worcester Rugby Club on 18th February 2014.

One item on the AGM Agenda was the presentation – by Richard Parry, Head of the Creative & Media Sector at the UKTi – of the inaugural ALES-UK Achievement Awards, launched in the year marking the 10th anniversary of the trade association.  Rainbow Productions was one of two member organisations presented with an Achievement Award, to acknowledge the company’s success in producing the Official Mascots for the London 2012 Olympic and Paralympic Games.

In addition to producing Wenlock and Mandeville under a licensing agreement, Rainbow Productions also managed the mascots’ personal appearances in the 24 months leading up to and during the Games, which saw the mascots visit stadia, schools, attend photo-calls with public figures, attend Torch Relay events, meet families within shopping centres and at local community events as well as undertake appearances on behalf of partner organisations.

Rainbow Productions’ Marketing Manager Helen Ede comments: “The London 2012 project was a phenomenal team effort – drawing on both our mascot manufacturing expertise and our ability to manage events.  We are delighted to have been recognised by our ALES-UK peers, all of which represent the best of British suppliers to the global leisure attractions sector”.

ALES-UK represents the interests of 51 member organisations, all of which are registered UK manufacturers and suppliers of amusement and leisure equipment.  The Chair of ALES-UK is Tony Whittaker of Elton Amusements, supported by Vice Chair Pauline Quayle of The Juice.