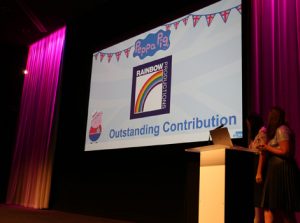 Over 230 licensees attended the Peppa Pig Partner Summit hosted by Entertainment One at BAFTA, London Piccadilly on Wednesday 21st September. As well as presenting 2017 plans for the Peppa Pig brand, eOne revealed the winners of the annual Peppa Pig Licensee Awards.

Rainbow Productions is delighted to have received the award for “Outstanding Contribution to the Peppa Brand” at this event, in recognition of the company’s many years of close co-operation and work with eOne to successfully build the Peppa Pig brand.
Fellow award-winners were Hacche Retail (Range of the Year), Blues (Most Collaborative Licensee), Illuminated Canvas (Best Newcomer) and Character Options (Longstanding Achievement) not forgetting Trends UK (Longest Working Lunch) and Roy Lowe & Sons (4am Award)!

Rainbow Productions was involved with the Peppa Pig brand from the outset, producing the Peppa Pig, George Pig, Mummy Pig and Daddy Pig official character costumes and managing their personal appearances under licence at third-party venues such as shopping centres, visitor attractions and family festivals.

Over the years since Peppa Pig’s launch, in addition to managing thousands of meet and greet personal appearances across the UK, Rainbow Productions has worked with the eOne Family teams to develop enhanced offerings including themed activities to complement the 10 Years of Muddy Puddles brand celebrations in 2014. The company has also taken Peppa Pig on Tours of UK shopping centres and has been commissioned to produce character costumes for eOne’s brand attractions partners such as Paultons Park in Hampshire [Peppa Pig World] and Leolandia in Italy –helping extend the brand into the leisure attractions market in the UK and overseas.

Looking ahead, Peppa Pig will be in attendance at the Royal Parks Half Marathon in October on behalf of the brand’s official charity partner, Tommy’s. She’s also all set to join the huge Hamleys’ Toy Parade along London’s Regent Street on November 20th and will be visiting towns and cities across the UK as part of Christmas Lights Switch-On events.

The Peppa Pig brand itself has been declared the winner of ‘Best Pre-School Licensed Property’ on numerous occasions at the annual Licensing Industry Awards. The television series was also awarded the Children’s BAFTA for ‘Best Pre-School Animation’ on several occasions. It is shown in upwards of 170 countries and has been translated into around 40 different languages. Peppa Pig is now worth over a billion dollars at retail – a figure that is ever-growing! Rainbow Productions is delighted to have played a supporting and collaborative role to help place the Peppa Pig brand in front of her fans during live events in the UK.