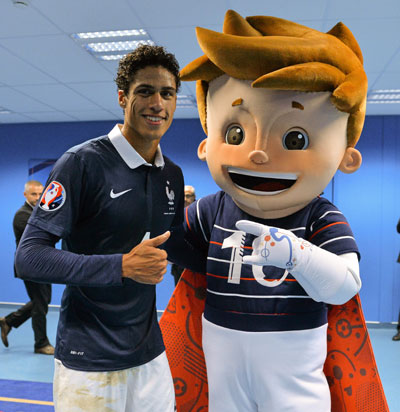 Rainbow Productions announces the company’s involvement in developing the official mascot for the UEFA EURO 2016 football tournament, which will take place from 10 June – 10 July 2016.

The walkabout mascot was manufactured by Rainbow Productions and launched at the Stade Vélodrome in Marseilles on 18 November 2014, ahead of a friendly match between France and Sweden.  The mascot arrived onto the pitch after the stadium announcer trailed his imminent arrival to fans; he proved an instant hit, not only demonstrating his footballing skills by staging a mock kick-off but also posing for selfie photographs with young fans.

The UEFA EURO 2016 mascot also made a guest appearance on TF1 French football programme Téléfoot on 23 November 2014, proudly wearing the red, white and blue colours of the host nation and the number 16 shirt.

The next step in the UEFA EURO 2016 mascot’s life is to find a name fitting for this little boy who acquired super hero attributes after finding three magical items: a ball, boots and a cape.  A competition to name the mascot runs on the UEFA website until November 26, allowing the public to vote for their favourite name from three options:  Driblou, Goalix or Super Victor. After announcing the winning name, a draw will take place, with one lucky subscriber winning the opportunity to meet the mascot face to face during a visit to their football club in France.

“I am thrilled and privileged that Rainbow Productions has again been involved in the project to bring to life the official mascot for this high profile football tournament.  The UEFA EURO 2016 mascot is all set to captivate young fans as he continues making personal appearances at key events in the run-up to the tournament”.

The UEFA EURO 2016 official mascot is the latest football tournament talisman brought to life by Rainbow Productions.  UEFA has commissioned the firm to manufacture every UEFA EURO mascot since the Goaliath mascot in 1996, when the event was hosted by England.