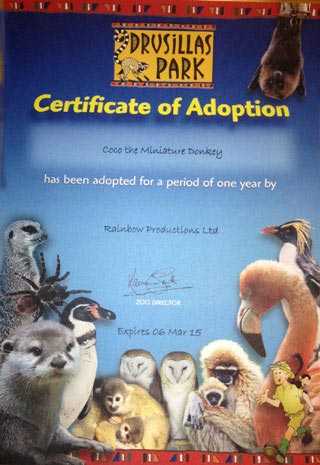 Rainbow Productions is delighted to announce that the company has adopted one of Drusillas Park’s animals for one year.

Coco the Miniature Donkey is adopted by Rainbow for the period until 6th March 2015, with the company receiving a Certificate of Adoption signed by park owner, Laurence Smith, to reflect this arrangement. Drusillas Park’s Adopt an Animal scheme also helps the zoo park’s Sussex based animal care and conservation programmes.

Drusillas Park is a family-run business situated on a 10 acre site near to Alfriston in East Sussex.  As well as the park’s Adopt an Animal scheme and zoo, the attraction offers visitors many guest experiences, including an extensive events programme of family fun and entertainment.

Rainbow Productions has worked with Drusillas Park for a number of years, managing the guest appearances of famous children’s characters.  The 2014 season will see licensed characters Peppa Pig and George, Fireman Sam and Scooby-Doo visiting the Events Arena at Drusillas Park.

“With both myself and Rainbow Productions working together with Drusillas for the last 10 years, now seemed like an ideal time to invest in a worthy cause and adopt our own animal. Coco the Miniature Donkey seemed the like the perfect fit for many reasons”.