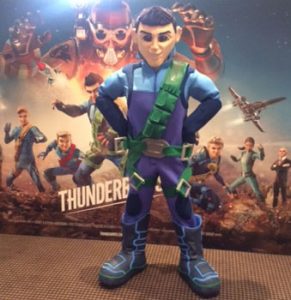 Virgil from Thunderbirds will attend the London Toy Fair this month.

Taking a glance at the year ahead, 2017 will see the Teletubbies turn 20, with increased activity in the pipeline around their 20th Anniversary.  Meanwhile, ‘Paddington 2’ is slated for UK cinema release in November.

In 2017 Rainbow Productions is set to manage the personal appearances of over 100 licensed children’s characters within a broad range of retail and leisure environments.  We’re also looking forward to delivering even more retail support activations and experiential events, working with brand owners, shopping centre and retail partners.

A selection of character events scheduled for January can be seen, below – all of which are subject to change.  We’re also excited to be working towards February Half Term events.

January dates include Action for Children’s Giant Wiggle event being attended by The Very Hungry Caterpillar™. The annual party organised by the London Taxi Drivers’ Fund for Underprivileged Children (LTDFUC) takes place on January 22 and will again be supported by Entertainment One through the attendance of Peppa Pig.

In the trade show calendar, the three day London Toy Fair exhibition takes place from January 24 – 26 and brings together brand owners, toy manufacturers and retailers.  The opening date is also Press Day and will again see Rainbow Productions managing the busy schedules of many licensed characters in support of associated product being showcased.

January 2: The Mall in Blackburn will host a visit today by PAW Patrol characters Chase and Skye.

January 18: Mr Strong will be heading to a Hertfordshire location.

January 21 & 22: Marsh Farm Animal Adventure Park in Essex has arranged for Peppa Pig to visit the venue to see their guests.

January 22: Entertainment One is supporting the annual London Taxi Driver’s Party for under privileged children, asking Rainbow Productions to manage the appearances of Peppa Pig at today’s event.

January 24: Day 1 of the Toy Fair trade exhibition will see many licensed children’s characters in attendance on the show floor and at photo-calls in support of brands and exhibitors.  Confirmed characters joining the line-up include the PJ Masks, Peppa Pig and George, Ben & Holly, the Twirylwoos, PAW Patrol’s Marshall and Skye, Virgil from Thunderbirds and Pokèmon characters Pikachu, Rowlet, Litten and Popplio.

January 25: The Very Hungry Caterpillar is set to attend a Giant Wiggle event, organised by Action for Children.