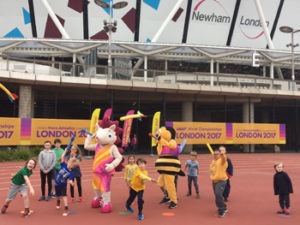 On Thursday 20th April 2017, the mascots for the 2017 World Championships were unveiled on BBC Breakfast. Hero and Whizbee were chosen as the winning designs of the Blue Peter mascot design competition, beating over 4000 other entries.

The winning designer is nine-year-old Elinor from the West Midlands.

“It is so exciting that my designs were chosen,” she said.

“I chose Whizbee and Hero because they are endangered species and are survivors. Bees are really important because they make the world go around and hedgehogs are determined and brave.

“It’s really cool getting them made into proper mascots. I can’t wait to see them in the summer.”

Since being launched on BBC Breakfast last week, the mascots have also made an appearance on Blue Peter and a paid visit to the Olympic Stadium (pictured above).

This summer’s Championships will be the biggest events to be staged at the London Stadium since the 2012 Olympic and Paralympic Games. It is the first time both Championships have been held in the same city, with over 3,000 athletes from over 200 nations competing over 20 days of action.