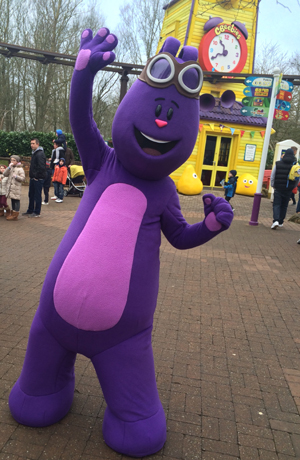 February saw a raft of half term events across the UK featuring live personal appearances from licensed children’s characters, including a tour of intu branded shopping centres by Tree Fu Tom.

Last month Rainbow Productions also expanded its portfolio of licensed characters available to book for personal appearances, with further new properties in the pipeline.  Already available for March appearances: the Twirlywoos, the Clangers, Boj and Mim-Mim.

During the month of March a number of famous children’s characters will be on the road seeing fans during appearances scheduled within visitor attractions including heritage railways, farm parks and castles.  Other types of venues hosting character visits this month include racecourses, shopping centres and town centres.

With the approach of Easter in early April, the end of March will also see Peter Rabbit set to attend a events including a visit to Telford on March 28 followed by a story-telling events at Brent Cross Shopping Centre on March 29.

A selection of character activities due to take place during March is included, below; all of these listings are subject to last minute changes, both to the date and the event location.

March 1: Oh from the film, Home, continues his tour this month, kicking off today with a visit to intu Metrocentre in Gatesehead.

March 5: Action for Children charity has arranged a filming opportunity appearance by the Very Hungry Caterpillar.

March 7: Nickelodeon has arranged visits by SpongeBob SquarePants to Smyth’s Toy Stores during March, starting today with in-store appearances at Smyth’s in Coventry.

March 7 & 8: Peppa Pig and George are going to see fans at Great Central Railway, a heritage railway in Leicestershire.

March 14: Millets Farm in Abingdon, Oxfordshire is hosting a visit from Peppa Pig.

March 14: Rainbow Productions is managing the appearances of Ruckley on behalf of the RFU, on England vs. Scotland match day.  On March 21 Ruckley will be present during the England vs. France game.

March 15: Paramount Pictures UK has arranged a number of personal appearances by SpongeBob SquarePants, including attending a Gala Screening today, the NEC in Birmingham on March 18 and Hamley’s in London on March 22.

March 22: Woburn Safari Park in Milton Keynes has arranged a Peppa Pig Narration event for their family guests to enjoy.

March 28: Peter Rabbit will be making meet and greet appearances at a community event in Telford.

March 28 & 29: Peppa Pig is going to Bressingham Steam and Gardens in Norfolk.

March 30 & 31: Shaun the Sheep will be greeting passengers at various London Heathrow terminals during his personal appearances at the airport over two days.