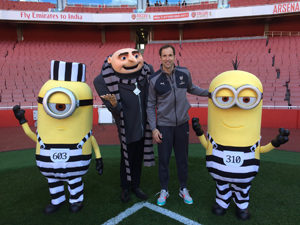 The Minions and Gru paid a visit to The Emirates Stadium

This year June kicks off in the middle of the school half term holidays and brings a stream of licensed children’s character activities with it. Over the course of the month Rainbow Productions will be busy as ever managing appearances from your favourite licensed characters.

This follows on from the success of May where characters including PJ Masks, Peppa Pig and PAW Patrol’s Chase and Marshall continued to go from strength to strength, attending numerous events throughout the UK and Ireland. Other highlights included The Minions and Gru paying a visit to the Emirates Stadium for Arsenal’s last game of the Premiership season against Everton and even getting to rub shoulders with some of the players before the match.

On the bespoke mascot front, Rainbow Productions continues to manage appearances of Whizbee and Hero in the run up to the World Athletics Championships. The mascot duo have been well received by the public after being unveiled last month and have been on the promotional trail ever since.

Below we have listed a selection of licensed character events coming up in June, as always these are subject to change. 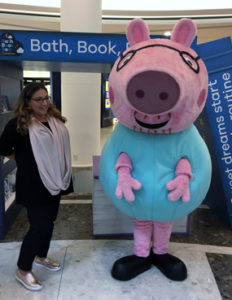 June 1st: PAW Patrol duo Chase and Marshall are paying a visit to Keighley Worth Valley Railway.
June 2nd: Frenchgate Shopping Centre in Doncaster will be hosting a Ben and Holly narration.
June 3rd: Children’s favourite Peppa Pig will be heading to Edmonton Green Shopping Centre in London.
June 4th: Chase and Marshall will be at Thornton Hall Farm in Skipton.
June 7th: Everyone’s favourite cheeky pigs, Peppa and George, will be at Chelmsley Wood Shopping Centre in Birmingham.
June 10th: Catboy and Owlette from PJ Masks will be paying a visit to the White Post Farm.
June 10th & 11th: Pleasurewood Hills theme park in Suffolk will be playing host to the Gruffalo.
June 10th & 11th: Postman Pat will be at Epping Ongar Railway.
June 14th: Peppa Pig and George will be appearing at Newlands Shopping Centre in Kettering.
June 17th: Ben and Holly will be dropping in to Knowsley Safari Park.
June 17th: Superhero trio PJ Masks will be at Smyths Longbridge.
June 17th & 18th: Paddington will be a guest at Cleethorpes Light Railway.
June 17th & 18th: The ever-popular Chase and Marshall will be appearing at Cannon Hall Farm.
June 24th: Visitors to Jackson Square in Bishops Stortford will be treated to appearances from the Gruffalo.
June 24th: Peppa Pig and Q Pootle 5 will be teaming up to appear at Manchester Children’s Book Festival.
June 24th & 25th: Chase and Marshall will be joined by Skye for an appearance at Paultons Park.
June 25th: If you head down to Woburn Safari park you might be lucky enough to spot PJ Masks stars Catboy and Owlette.
June 25th: Paddington continues his string of railway appearances with a day at Midland Railway in Derbyshire.