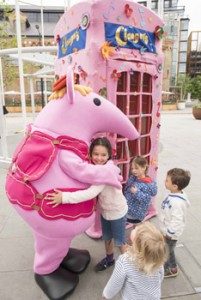 Pop up ‘Call The Clangers’ experience at King’s Cross .

Following the end of May Bank Holiday weekend, June kicks off during the middle of the school Half Term holiday and will see a continuation of licensed children’s character activities being delivered across the country.

Last month in addition to managing character bookings at third-party venues such as nurseries, family entertainment centres, visitor attractions and shopping centres, Rainbow Productions also took licensed character costumes to trade exhibitions such as Progressive Greetings Live in London as well as to licensor-led brand activations.  May 21, for example, saw Tiny and Small from the Clangers head to Battle Bridge Place in King’s Cross on behalf of Coolabi to join a pop-up Clangers experience [pictured], timed to coincide with the launch of new TV episodes.

During the same weekend, Thomas the Tank Engine also attended the premiere, at King’s Cross Theatre, of The Great Race, the latest Thomas & Friends film. Joining Thomas on the blue carpet at this event were celebrities such as Frankie Bridge [pictured], former member of The Saturdays and runner-up in Strictly Come Dancing in 2014.

Meanwhile, in June Rainbow Productions will also be taking Snoopy and Charlie Brown to retailers such as HMV and Sainsbury’s, as part of promotional appearances undertaken on behalf of Twentieth Century Fox.

On the bespoke mascot front, Rainbow Productions is delighted to have manufactured the official mascot for the UEFA EURO 2016 football tournament which kicks off on June 10 and runs until 10 July.  Look out for mascot Super Victor – one representative of England that has a more assured route to the final!

June 1: Bob the Builder heads to The Strand shopping centre in Bootle.

June 1: Jones Lang LaSalle has arranged for The Gruffalo to visit the Queens Arcade in Cardiff.

June 1: Fireman Sam is going to be present at Adventure Wonderland in Bournemouth today.

June 1: Chase and Marshall from PAW Patrol will be at The Royals Shopping Centre in Southend.

June 2: Bing and Flop will be heading to Drusillas Zoo Park.

June 3: Paddington will be present at Borough Parade shopping centre in Chippenham.

June 3: A Ben and Holly Narration event has been organised to take place today at Surrey Quays Shopping Centre.

June 3: Pettitts Animal Adventure Park in Norwich is the venue for Peppa Pig and George’s visit.

June 4: Leo, Raph, Mikey and Donnie from the Teenage Mutant Ninja Turtles are heading to the Nick Store in Leicester Square.

June 4: Dizzy Ducks has arranged for Peppa Pig to visit their nursery in Hainault.

June 5: Flair Leisure Products has arranged for Leo and Raph from the Teenage Mutant Ninja Turtles to make in-store personal appearances at Harrods.

June 11 & 12: Kirklees Light Railway has organised a visit by The Gruffalo.

June 12: Captain Barnacles from the Octonauts heads to Doncaster Racecourse.

June 18: The Very Hungry Caterpillar is going to the Swansgate Shopping Centre in Northampton

June 18 & 19: We’re taking Hey Duggee to the BBC Good Food Show for a promotional appearance on behalf of BBC Worldwide.

June 25: A Paddington narration event takes place at an event organised by the Royal Borough of Kensington & Chelsea.