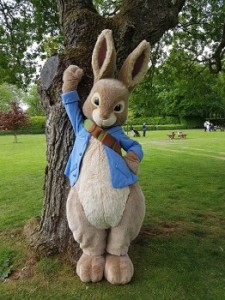 Last month Rainbow Productions supported Entertainment One’s work with the Save the Children’s Den Day campaign, an initiative encouraging children to build dens out of every day materials.  Den Day took place across the UK on June 17 and 18, resulting in children building dens within their homes as well as in locations such as nurseries, playgroups and schools as well as public spaces such as shopping centres.  On June 17 Entertainment One supported two such Den Day events hosted at two London shopping centres: Westfield in Shepherd’s Bush and Westfield Stratford.  Peppa Pig joined the Den Day event in west London, while Daddy Pig headed to Stratford in east London.  Running as part of these Westfield Den Day activities, there were character appearances, story-telling sessions, opportunities for fans to pose for photos next to a Peppa Pig scene, plus branded give-aways such as Peppa Pig stickers and activity sheets.

Looking ahead to July, Tiny and Small from the Clangers are continuing their tour of festivals. The characters have already attended the Geronimo Festival at Harewood House near Leeds, over the first Bank Holiday weekend in May. This month they are set to join the line-up at Bluedot at Jodrell Bank Observatory in Cheshire on July 23 & 24, followed by Camp Bestival in Dorset from July 29-31.

Many more licensed character events are scheduled for July, with a sample of listings included below. Please note that all character appearances are subject to potential last-minute changes.

July 2 & 3: The Gruffalo will be visiting Audley End Miniature Railway in Essex.

July 3: A Fireman Narration is taking place at Soar at intu Braehead.

July 3: Postman Pat and Ben will be taking part in a mini show today, arranged by Stafford Borough Council.

July 5: FremantleMedia has arranged for Danger Mouse to make in-store appearances at Smyths Toys in Peterborough.

July 9 & 10: The Gruffalo will be present at Marsh Farm in Essex.

July 9 & 10: Peppa Pig will be visiting the London Museum of Water & Steam.

July 10: Paddington will be making personal appearances at Southwell Racecourse in Nottinghamshire.

July 12-14: The Great Yorkshire Show takes place in Harrogate and will include separate appearances by Peter Rabbit and Aardman’s Timmy .

July 16: A Tree Fu Tom Activity has been arranged by the council and will take place in Oldham Town Centre.

July 16 & 17: This weekend Glenarm Castle in County Antrim will host appearances by Chase and Marshall from PAW Patrol.

July 17: Colne Valley Railway in Essex has arranged for Fireman Sam to visit.

July 22: Chase and Marshall from PAW Patrol will be present in St. Helens.

July 23 & 24: Dean Forest Railway in Gloucestershire has organised a visit from Paddington.

July 23: Chase and Marshall will be present during a narration event taking place today at Riverside Shopping Centre in Hemel Hempstead.

July 23 & 24: The Blue Dot Festival at Jodrell Bank in Cheshire will also see a mini show take place by Tiny and Small from the Clangers.

July 24: Chase and Marshall from PAW Patrol will be present during story-telling sessions at festival Place Shopping Centre in Basingstoke.

July 25: Laa-Laa and Po from the Teletubbies head to Adventure Wonderland in Bournemouth.

July 25-27: Finkley Down Farm in Andover has arrange for Chase and Marshall to head over and see guests at the farm park attraction.

July 26: The Gruffalo will be present to see guests at Camel Creek visitor attraction on Cornwall.

July 27: Drusillas Zoo Park in East Sussex has arranged a visit from Peppa Pig and George.

July 28: Chase and Marshall are going to Angel Place Shopping Centre in Bridgwater.

July 28: Newlands shopping centre in Kettering is hosting a visit from The Gruffalo.

July 29: Peppa and George will be making personal appearances at The Alnwick Garden in Northumberland.

July 29-31: Tiny and Small from the Clangers will be present at Camp Bestival in Dorset.

July 30: Fireman Sam will be seeing guests at White Post Farm in Mansfield.

July 30: Chase and Marshall are also making appearances as part of a narration during their visit to Newmarket Racecourse.

July 31: The St. Enoch Centre in Glasgow is today hosting a visit from Chase & Marshall.

July 31: The Gruffalo is heading to Kent Life, a heritage farm attraction located in Maidstone