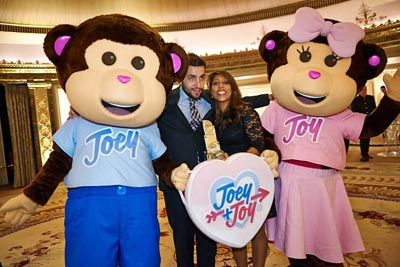 Wednesday 10 December 2014 sees Rainbow Productions managing the guest appearances of monkey best friends Joey & Joy during The Westminster Kids’ Club Christmas Party, which takes place in the Members’ Dining Room at the House of Commons between 4pm and 6pm.

The annual Westminster Kids’ Club party is organised by Keith Vaz, Member of Parliament for Leicester East and brings together disadvantaged and disabled children and children of MPs and Staff.  The SP8 of the Art Foundation is the nominated charity being supported from the proceeds of the 2014 event.

Withit Licensing, the international rights holders for the Joey & Joy brand, asked Rainbow Productions to look after this latest public appearance by the characters.  Joey & Joy were first publicly seen during the Brand Licensing Europe Expo in October 2014; the following month they attended the Progressive Preschool Awards 2014 [pictured] at the Dorchester Hotel, Mayfair.