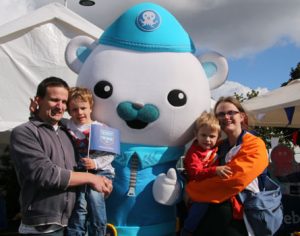 Captain Barnacles [pictured here] will also take part in mini Shows in November. During November, planning turns towards Christmas, as retail and leisure destinations secure family entertainment as part of their festive programme line-ups. Character Meet and Greets, story-telling sessions and mini shows are scheduled across the UK – with examples featured in the listing, below.

Rainbow Productions is also all set for the 2016 Hamleys Christmas Toy Parade. Following on from the debut 2015 Parade, the 2016 event is set to be even bigger. Families lining London’s Regent Street will have an opportunity to see some of their favourite characters taking part in the Parade.

Then there was also October Half Term. As well as managing characters in our 100+ portfolio as part of our Character Appearance Programme, Rainbow was involved with activities such as taking the Trolls along to key promotional events and movie screenings.

Below are details for appearances scheduled for November. Please note that all bookings are subject to change.

November 2: Fireman Sam is going to Hamleys in Dublin, organised by Mattel.
November 3: Bob the Builder will be making in-store appearances at Debenhams on London’s Oxford Street.
November 4: Fenwick department store in Newcastle has arranged a visit today from television’s Peter Rabbit.
November 5: Leo and Raph from the Teenage Mutant Ninja Turtles will be heading to a fireworks community event organised by the Cheltenham Round Table.
November 5: Virgil from Thunderbirds will be seeing fans at The Entertainer toy store inside Merry Hill shopping centre.
November 6: A Peppa Pig and George storytelling event takes place at shopping and leisure complex, The Broadway, Bradford.
November 7 – 9: Many licensed children’s characters will be attending the World Travel Market exhibition at ExCel, London.
November 10: The Snowman™ and the Snowdog head to Resorts World Birmingham.
November 10: Cardiff County Council has arranged a visit from The Gruffalo.
November 12: Rainbow Productions is managing appearances of Trolls Poppy and Branch at Harrods in Knightsbridge on behalf of Twentieth Century Fox.
November 13: PAW Patrol’s Chase and Marshall will be making appearances at Cheltenham Racecourse.
November 17: Peppa Pig is going to Mothercare in Warrington; meanwhile on November 19 Chase and Marshall will be present at the retail store.
November 17: Centrale Croydon has booked a Chase and Marshall story-telling event.
November 17: Ice Age characters Sid and Scrat will be making appearances in Romford on behalf of London Borough of Havering.
November 19: The Bentall Centre in Kingston has arranged a visit from The Snowman and the Snowdog.
November 19: Catboy, Gekko and Owlette from PJ Masks will be at the Palace Exchange, an outdoor shopping mall in Enfield.
November 19: Sid and Scrat are going to Basildon for a council-organised event.
November 19: The Clangers will be performing their mini show in Belfast at the city’s Christmas lights switch-on event.
November 19: The Bentall Centre in Kingston today hosts appearances by Postman Pat.
November 20: The Hamleys Christmas Toy Parade takes place along London’s Regent Street and is set to be even bigger than the debut event in 2015; Rainbow Productions will be managing the presence of lots of famous children’s brands at this year’s parade.
November 20: Leo, Raph, Mikey and Donnie are going to Oldham for a council-led event.
November 20: The PJ Masks are today making personal appearances at Castle Mall shopping centre in Norwich.
November 23: PAW Patrol’s Skye joins Chase today for appearances at an event on behalf of Barnsley Metropolitan Council.
November 23: Wolverhampton City Council has booked Boj to visit the city.
November 24: Woking Shopping Centre has booked a mini show featuring Captain Barnacles and Kwazii from the Octonauts.
November 25: Freshney Place shopping centre will receive a visit from Chase and Marshall.
November 26: Postman Pat is going to Green Oaks Shopping Centre in Widnes.
November 26: Spindles Town Square in Oldham has booked Fireman Sam to visit.
November 27: Ben and Holly will be making several appearances today at Resorts World Birmingham.
November 27: Bing and Flop will be joined by a narrator for story telling sessions at Kingdom Shopping Centre in Glenrothes.
November 27: Raymond Briggs’ Father Christmas heads to Princess Square in Bracknell.