Your Guide to October Character Events 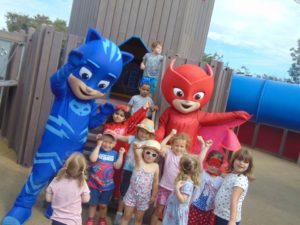 We’ve only just waved goodbye to summer but we’re already looking ahead to our autumn character events and beyond. There will be plenty to keep the kids entertained throughout the month. The half term holidays will see appearances from the likes of PAW Patrol, Bing and Flop, The Gruffalo and many more at venues across the UK and Ireland. If that wasn’t enough, the annual Kidtropolis event will be happening at London’s ExCeL arena during the last week of October, featuring some of your favourite licensed characters!

A plethora of characters will be on display at the Brand Licensing Europe expo in mid-October (keep your eyes peeled for a blog post on this very soon!) They’ll be milling around London’s Olympia and later joining forces for the character parade.

The eagerly awaited ‘Paddington 2’ is slated for cinema release in November and so Paddington himself will be ramping up appearances this month and delighting fans across the country.

Read on to find out what your favourite characters will be up to throughout the month. As always these are subject to change. 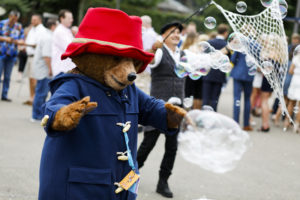 1st October: Mr Men and Little Miss favourite, Mr Tickle, will be at the Bath Literary Festival.
1st October: PJ Masks trio Catboy, Gekko and Owlette are appearing at Marsh farm in Essex.
4th October: Chelmsley Wood Shopping Centre have booked Fireman Sam to appear.
7th October: Octonauts favourite Captain Barnacles will be making appearances at the National Maritime Museum.
7th October: Ben and Holly will be leaving the Little Kingdom to meet shoppers at B&Q in Margate.
7th and 8th October: Catboy and Owlette will be teaming up for a visit to Cannon Hall Farm in Barnsley.
7th and 8th October: Peppa Pig will be at Ravenglass and Eksdale Railway in the Lake District to participate in a narration event.
11th October: The Newlands Shopping Centre in Kettering will be playing host to Fireman Sam.
12th October: Heathrow Airport regular Little Miss Explorer will be at Terminal 2 today.
14th October: Little Miss Explorer’s partner in crime, Mr Adventure, will be at Heathrow Terminal 4.
14th October: Teenage Mutant Ninja Turtles twosome Raphael and Leonardo are heading to Toys R Us in Reading.
20th October: Mr Adventure is heading back to Heathrow, this time he’ll be appearing at Terminal 3.
20th October: See Chase and Skye at Smyths Liverpool. 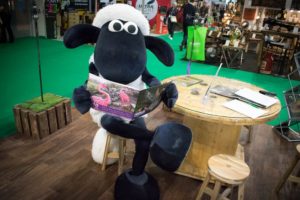 21st and 22nd October: Whipsnade Zoo will be hosting all three PJ Masks characters during this weekend.
21st October: Bing and Flop will be continuing the Bing Tour at The Entertainer in Sunderland.
21st October: Heatblast of Ben10 fame has been booked to appear at Smyths in Ashford.
21st October: Trolls protagonists Poppy and Branch will be meeting shoppers at the Bishop’s Stortford branch of Smyths.
22nd October: If you’re flying in or out of Heathrow Terminal 4 today you might spot Little Miss Explorer.
23rd October: Kidtropolis kicks off at London’s Excel Arena today and includes a narration event with Peppa Pig and George.
24th October: Powerpuff Girls Bubbles, Blossom and Buttercup are heading to Waterstones in Bluewater.
24th October: Paddington continues his appearances at the Museum of London.
24th October: Captain Barnacles and Kwazzi will be heading to Kidtropolis today.
24th October: Fan favourites Chase and Marshall are appearing at Bristol’s Yates Shopping Centre.
25th October: The Gruffalo will be heading out of the Dark Wood to see his fans at Adventure Wonderland in Bournemouth.
25th October: Scooby Doo will be going to see budding detectives at Drusilla’s Zoo Park.
26th October: PAW Patrol’s Rubble has been booked to appear at Kidtropolis.
26th October: The Gruffalo continues his half term appearances at Dreamland Margate.
28th and 29th October: Passengers at Spa Valley Railway will be able to see PAW Patrol’s Chase and Marshall.
28th October: The mischievous Prison Minions can be seen at Smyths Scunthorpe.
28th October: Chase will be on the case when he makes a solo appearance at Woburn Safari Park.
28th October: PJ Masks Catboy will be heading to Victorian Arcade in Walsall.
29th October: Paddington will be returning to Hamley’s Toy Store on Regent Street. 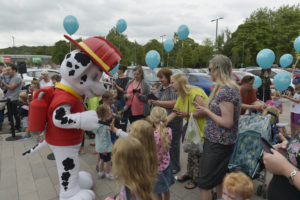