Many of us at some point in our lives have owned a token, whether it was one we took into the exam room or perhaps we gave it to someone going in for an operation. They’ve been used for many generations as symbols of good fortune. Similarly, there’s a long, fascinating history when it comes to football mascots.

It didn’t take football clubs long to recognise there was a massive marketing opportunity when it came to football mascot costumes. Whether used to hook young fans into the game or sell merchandise based around the mascot, their use in the game has come a long way over the years.

Astonishingly, clubs used to use real-life animals as mascots to entertain the masses and, sometimes, even scare the opponent.

The first UK football mascots were actual animals. This trend only started to change when the Muppets gained popularity in the 1980s. Football marketing departments soon realised they could amuse fans by encouraging them to interact with the mascots.

Because of the Muppets taking the world by storm, clubs came to understand it was super-simple to develop characters that were an amalgamation of puppets and characters. And so, the trend of football club mascots was born!

What Does the Term “Football Mascots” Mean?

The word ‘mascot’ originates from the French word ‘Mascotte’ which means ‘lucky charm’. This is where the idea of linking football mascots with fortune comes from. It ties in with the psychology of triumph.

It didn’t take long before fans bought into the idea, particularly when the mascot connected to something they could relate with, like desire or a ‘fighting spirit’.

English football mascots, unlike American ones, took on more of a human-like form. They were dressed up as animals or wore clothes that corresponded to the club they represented. For example, Huddersfield Town’s nickname is ‘The Terriers’ so their mascot was Terry the Terrier; a terrier dressed in the iconic blue and white striped t-shirt.

Other Types of Mascots

In the UK, mascots for football teams aren’t limited to animals, people dressed up or bizarre Muppet-like creatures. Nowadays, it’s no surprise for teams to have young children clad in the kit of the home club and another in the kit of the away club and accompany the players onto the pitch. These youngsters are known as mascots. Often, clubs will run competitions to decide who should get the privilege of being one!

Check out some of these top UK football mascot characters… 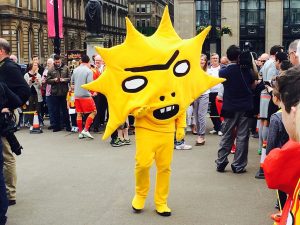 By Andrew Hendo (Taken at a media event in Glasgow) [GFDL (http://www.gnu.org/copyleft/fdl.html) or CC BY-SA 3.0 (https://creativecommons.org/licenses/by-sa/3.0)], via Wikimedia Commons 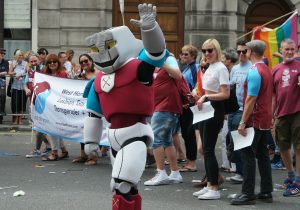 Hammerhead, West Ham’s official football mascot, looks rather like the discarded spawn of a shark as well as an Iron-Man imitator. West Ham’s mascot was, according to the club’s official release on the matter, created when ‘lightening hit the ironworks’. 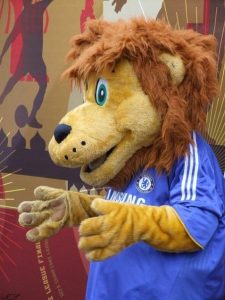 By Святослав Любимов (Own work) [GFDL (http://www.gnu.org/copyleft/fdl.html) or CC BY 3.0 (http://creativecommons.org/licenses/by/3.0)], via Wikimedia Commons

Chelsea’s mascot is a lion taken from their club logos and named Stamford the Lion. In July 2005, the costume was stolen from Stamford Bridge. 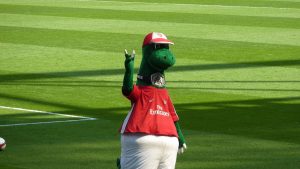 Since Arsenal are known as the Gunners, it made sense to dub their football team mascot ‘Gunnersaurus Rex’. While he might look more like a kindly, outsized lizard than a dinosaur, this friendly dino has been absorbed in loads of key events and appearances over the years. Perhaps the most noteworthy was during Arsenal’s minute’s silence. Gunnersaurus Rex joined them in the line-up, bowing his head, around the centre circle. 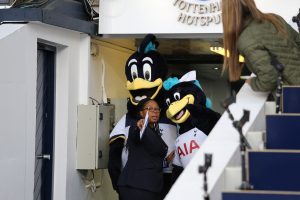 Since the 1921 FA Cup final, the Tottenham Hotspur crest has featured a cockerel. So, it seemed wise to name their official Spurs mascot ‘Chirpy the Cockerel’.