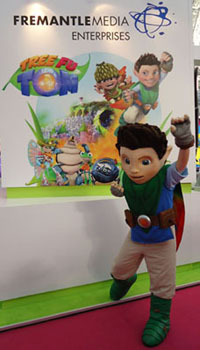 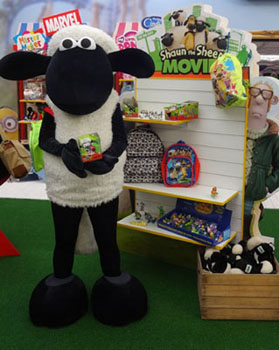 Many character events this February are taking place over the Half Term school holiday period; a key time for retailers, shopping centres and attractions to host extra events to attract family audiences to their venues.

February Half Term will see Tree Fu Tom embark on a tour of intu Shopping Centres, for example, while Paddington will head to the National Railway Museum in York.

Other notable calendar dates this month include the UK release of the Shaun the Sheep movie on Friday 6 February.  Shaun the Sheep has many diary engagements this month, interacting with the public and also making supportive trade show appearances.

Also from the Aardman stable of children’s properties, Timmy is set to attend the National Farm Attractions Network trade show on Thursday 12 February at the MK Dons Stadium in Milton Keynes.

Character events scheduled to take place during February 2015 are detailed, below.  Please note that the information listed is subject to last minute changes to both the event location and the date.

Feb 1: Peppa Pig will be joined by Mummy, Daddy and little brother George for a family outing to attend her film premiere in London’s Leicester Square.

Feb 2:  Boj, Peppa Pig and The Gruffalo are going to the Spring Fair retail and gifting trade exhibition at the NEC.

Feb 12: Rainbow Productions is exhibiting at the National Farm Attractions Network annual conference and trade show –  which takes place at the MK Dons Stadium in Milton Keynes –  and will be joined by Aardman character, Timmy.

Feb 12 – 14: Shaun the Sheep will be greeting air passengers during his personal appearances, over three days, at various London Heathrow terminals.

Feb 13: Today is the start of Tree Fu Tom appearances and experiential activity across a number of intu Shopping Centres this Half Term |See individual shopping centre websites for further information.

Feb 14 – 22: Paddington heads to the National Railway Museum in York to join in with lots of fun activities for kids over Half Term.

Feb 16: Aardman has arranged for movie star Shaun the Sheep to make in-store appearances at Hamley’s in Manchester.

Feb 18: Dora the Explorer will be visiting Centrale shopping centre in Croydon today.

Feb 18: Royal Priors shopping centre in Leamington Spa will receive a visit from Postman Pat® and Jess the Cat.

Feb 18: Leo and Raph from the Teenage Mutant Ninja Turtles are heading to West Quay shopping centre in Southampton to see shoppers.

Feb 19: The Grosvenor Centre in Macclesfield has arranged for Ben & Holly from Ben and Holly’s Little Kingdom to make personal appearances at intervals throughout the day.

Feb 22: Scooby-Doo will be going to Manor Walks shopping centre in Northumberland.

Feb 28: Paddington is going to the London train station sharing his name, for an appearance on behalf of Visit Britain.