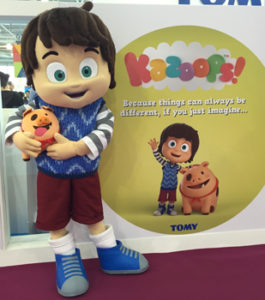 Monty from Kazoops is now available to attend UK events.

With February Half Term around the corner, many attractions, shopping centres and retailers will be putting on extra events to help parents keep the kids entertained during the school holiday period.

Branch and Poppy from the hit movie Trolls will be appearing at Sainsbury’s Sydenham on 13th February and HMV Poole on 18th February to promote the release of their DVD, Peppa Pig is heading to Woburn Safari Park on 15th February and PAW Patrol’s Chase & Marshall will be at Telford Shopping Centre on 19th February.

Plus, after featuring in the recent Halifax adverts, Scooby-Doo and Shaggy will be embarking on a tour Halifax branches in Newcastle (13th), Leeds (14th), Manchester (15th), Birmingham (16th), Kingston (17th) and Southampton (18th).

February also sees Monty from Kazoops join our licensed character list after making his debut appearance at Toy Fair in London in January.

Character events scheduled to take place during February 2017 are detailed, below.  Please note that the information listed is subject to last minute changes to both the event location and the date.

Feb 4: Ruckley will be supporting the Mens England Rugby team at Twickenham during their RBS 6 Nations match against France. He’ll be back on Sunday 26th February when they come head to head with Italy.

Feb 4: Peppa Pig heads to Tesco in Poole today to meet their shoppers as part of their family fun day.

Feb 9 – 12: Mr. Adventure is heading back to London Heathrow to greet air passengers in various terminals, over the 4 days.

Feb 11: PAW Patrol’s Chase and Marshall will be appearing at The Spa Valley Railway in Royal Tunbridge Wells as part of the half term events programme.

Feb 14: This Valentine’s day, Nicholson’s Shopping Centre in Maidenhead will be visited by Catboy, Owelette and Gekko from PJ Masks.

Feb 15: Peppa Pig will be returning to Woburn Safari Park in Milton Keynes for some half term fun.

Feb 17:  Chase and Marshall will then be heading to The Mall in Walthamstow to meet shoppers.

Feb 18: The Milky Way in Devon has arranged PAW Patrol Story Time sessions with appearances from Chase to entertain their visitors.

Feb 20: The Gruffalo will be leaving the deep dark wood to visit Alnwick Gardens in Northumberland.

Feb 21 – 22: Visitors to Keighley Worth Valley Railway will be treated to appearances by Sid and Scrat from Ice Age™.

Feb 24: Thomas and The Fat Controller will be steaming into Frenchgate Shopping Centre in Doncaster, for photo opportunities with shoppers.

Feb 25: See Chase and Marshall from PAW Patrol during Story Time sessions at The Broadway Shopping Centre in Bradford today.

Feb 25: Ruckley will be heading back to the Twickenham Stoop Stadium today, to support the Women’s England Rugby team in their match against Italy.