EXPERIENTIAL CHARACTERS EVENTS ACROSS THE UK DURING JUNE 2014 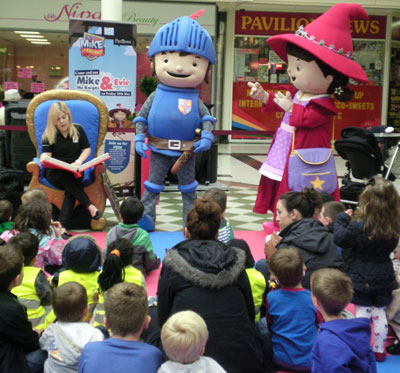 Story-telling with Mike the Knight and Evie at The Pavilions, Uxbridge.

Personal appearances and experiential events with licensed children’s characters are scheduled to take place, via official licensee Rainbow Productions, at a range of organisations during the month of June, with host venues including racecourses, farm parks, heritage railways, theme parks and shopping centres.

Postman Pat is taking time out to from his busy film -star life to perform his “Special Baking Service” mini show during Newark Festival’s Family Fun Day which takes place on the final day (Sunday 22 June) of the 3-day festival in Nottinghamshire.

Brent Cross has arranged for four characters from popular kids’ television show, Peppa Pig, to make guest appearances at the shopping centre.  Not only will families have an opportunity to see Mummy Pig, Daddy Pig, Peppa Pig and George at intervals on June 28, they will also be able to participate in a Holiday Fun Treasure Hunt activity and pose for additional photos within a beach scene Peppa Pig branded standee, developed to complement the event.

A selection of licensed character events managed through Rainbow Productions in June is listed underneath, although it’s worth noting that both the date and the venue is subject to change.