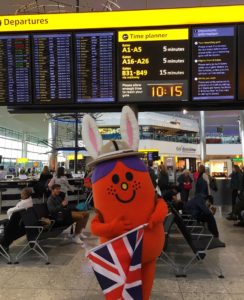 Little Miss Explorer is all ready for Easter!

The Easter holidays will soon be in full swing, so why not keep the kids entertained at a character event? There’s certainly plenty coming up!

Peter Rabbit and Bing continue to be popular choices for Easter and will spend the month making appearances at venues up and down the country, much to the delight of her fans.

The Kidtropolis Come and Play event will be taking place at Birmingham’s NEC from 6th-8th April and will include some character appearances, read on to see if any of your favourites will be there.

As ever, all events listed below are subject to change. 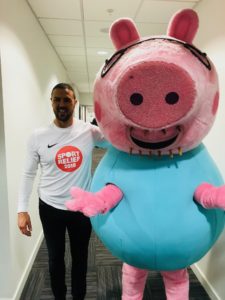 1st April: The Gruffalo will be at Bressingham Steam & Gardens.
1st April: Popular duo Bing & Flop will be heading to The Red Dragon Centre.
1st April: Peter Rabbit will be taking part in a narration event at The Lowry Outlet in Manchester.
1st & 2nd April: All four PAW Patrol characters, Chase, Marshall, Skye and Rubble, will be appearing at Twycross Zoo.
2nd April: Peter Rabbit will be hopping over to Huntingdon Racecourse.
2nd April: Peppa Pig will be spending Bank Holiday Monday at Woburn Safari Park in Milton Keynes.
3rd April: Today Peppa Pig will be at Camel Creek in Cornwall.
4th April: Manor Walks Shopping Centre in Northumberland will be holding a Peter Rabbit narration event.
4th April: Two thirds of the PJ Masks, Owlette and Catboy, are booked to appear at Drusillas Zoo Park in Sussex.
4th April: One of the new characters on the block, Little Miss Inventor, is heading to the Museum of London today.
4th April: PAW Patrol’s Chase and Marshall will be at Royal Victoria Place Shopping Centre in Tunbridge Wells.
5th April: Shoppers at the Merrion Centre in Leeds might be lucky enough to spot Peter Rabbit.
5th April: Cheeky little pigs Peppa and George are heading to Twinlakes in Melton Mowbray.
6th April: PAW Patrol favourite Skye will be at the Kidtropolis event at Birmingham NEC.
6th April: Paddington will be making appearances at the Ropewalk Shopping Centre in Nuneaton.
7th April: The ever-popular Skye and Marshall will be at Churnet Valley Railway in Staffordshire.
8th April: Today it will be Marshall’s turn to make appearances at the NEC for Kidtropolis.
8th April: Catboy and Owlette will be meeting fans at London Zoo. 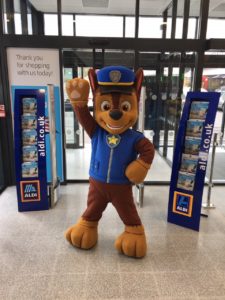 10th April: Peter Rabbit continues his busy Easter at Drake Circus in Plymouth.
10th & 11th April: Marshall will be making solo appearances at Crealys in Devon.
11th April: Skye and Rubble are booked to appear at Adventure Wonderland in Bournemouth.
11th April: Peppa Pig and George will be participating in a narration event at Telford Shopping Centre.
12th April: Regent Arcade in Cheltenham will be hosting a narration event including Peter Rabbit.
12th April: Paddington is heading to the St. Enoch Centre in Glasgow.
12th April: PAW Patrol continue to be busy and today Skye and Rubble will be at the Eastgate Shopping Centre in Basildon.
14th April: Peppa Pig will be at Dean Forest Railway to see her fans.
14th April: Peter Rabbit will be spending today at the Parkway Shopping Centre in Newbury.
15th April: Owlette and Catboy are going to be at Knebworth House in Hertfordshire.
21st April: Catboy will be making a solo appearance at The Entertainer in Banbury.
22nd April: Peter Rabbit comes to the end of a busy month at Wincanton Racecourse.
28th April: Smyths in Luton will be playing host to Rubble and Chase from PAW Patrol.
28th April: Peppa Pig will be rounding off the month at Crealys Devon.
29th April: Gekko and Catboy are going to be at Woburn Safari Park in Milton Keynes. 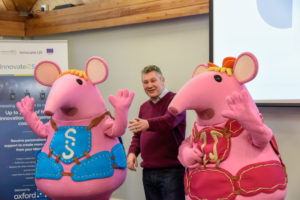