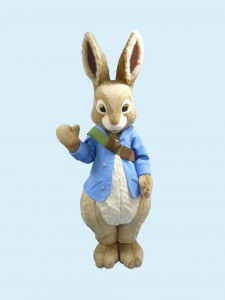 Spring is here at last which means the temperatures are (slowly) rising, the days are getting longer and Easter is finally upon us, bringing with it a ton of licensed character events!
The Easter holidays are usually a busy time for Peter Rabbit and this year is no exception, he will be appearing at Norwich’s Castle Mall, John Lewis on Oxford Street and Mothercare in Leeds to name just a few.
And of course many of the fan favourites will be as busy as ever with PAW Patrol, The Gruffalo and PJ Masks making numerous appearances throughout the month. It’s also an exciting time for Peppa Pig, with ‘Peppa Pig: My First Cinema Experience’ slated for UK release on April 7th.

Read on for a selection of licensed character events happening throughout April which are, as ever, subject to change.

Saturday 1st April: Ben and Holly will be leaving the Little Kingdom to visit the St. Enoch Centre in Glasgow.
Saturday 1st– Sunday 2nd April: PAW Patrol favourites Skye and Chase will be at the White Post Farm centre in Nottinghamshire.
Monday 3rd April: Peter Rabbit kicks off a busy period of Easter events with an appearance at Castle Mall, Norwich.
Wednesday 5th April: The increasingly popular PJ Masks trio, Catboy, Gekko and Owlette, will be at Royal Victoria Place in Tunbridge Wells to partake in a narration event.
Wednesday 5th April: Visitors at Drusillas Zoo Park in Sussex have to opportunity to go and see Bing and Flop.
Friday 7th April: Peppa Pig and George will be at The Mercury Mall in Romford to coincide with the release of ‘Peppa Pig: My First Cinema Experience’.
Saturday 8th April: Mike the Knight will be participating in a narration event held at the Waterside Shopping Centre in Lincoln.
Saturday 8th– Sunday 9th April: PAW Patrol duo Chase and Marshall will be joining in the Pup Pup Boogie event at Whipsnade Zoo.
Saturday 8th– Sunday 9th April: Anyone doing a spot of shopping this weekend might be lucky enough to spot Peter Rabbit at John Lewis on Oxford Street. 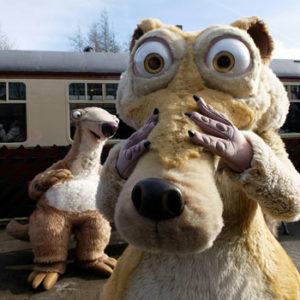 Tuesday 11th April: Iconic Ice Age twosome Sid and Scrat will be at Exeter Racecourse.
Thursday 13th April: PJ Masks continue their busy month with an appearance at Eastgate Shopping Centre in Basildon.
Friday 14th– Sunday 16th April: Skye, Chase and Marshall from PAW Patrol will be spending their Bank Holiday weekend at Folly Farm in Pembrokeshire.
Friday 14th – Saturday 15th April: Bing and Flop will be out and about at Roaring Meg Retail Park in Stevenage.
Saturday 15th April: The ever-popular Gruffalo will be at West Somerset Railway in Minehead.
Saturday 15th April: If you pop in to The Entertainer in Kingston you might catch a glimpse of Wissper.
Monday 17th April: Peter Rabbit will be rounding off a busy period of Easter appearances with a visit to Mothercare in Leeds.
Monday 17th April: Racegoers at Huntingdon racecourse might be lucky enough to spot Paddington Bear.
Wednesday 19th April: Adventure Wonderland in Bournemouth will be playing host to PAW Patrol’s Marshall and Skye.
Thursday 20th April: Daddy Pig will be making a solo appearance at Booktrust in the Trafford Centre.
Saturday 29th April: The Gruffalo will be heading to Pembroke to make an appearance at Oakwood Theme Park.
Saturday 29th– Sunday 30th April: Peppa Pig continues her string of railway appearances at Loughborough’s Great Central Railway. 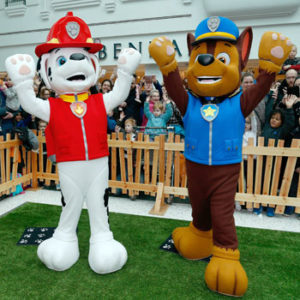