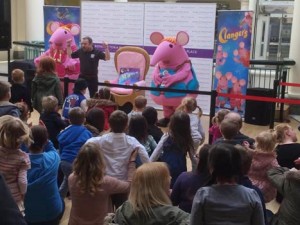 Tiny and Small from the Clangers visited RVP in Tunbridge Wells for a story-telling event.

A selection of licensed character appearances, treasure hunts, narration events and activities taking place in April 2016 can be found in the listings, below.

The end of March saw a busy Easter Bank Holiday Weekend full of licensed character events at locations including Blenheim Palace in Oxfordshire, Toys R Us in York, Huntingdon Racecourse in Cambridgeshire, plus visitor attractions across Wales and South West England – as well as many more venues!

As the Easter break continues, for many, into the month of April, character appearances are being hosted by shopping centres, retailers and visitor attractions; the aim being to provide added entertainment and attract even higher numbers of family visitors over the school holiday period.

Another shopping centre hosting a character event recently was Royal Victoria Place in Tunbridge Wells. Tiny and Small from the Clangers headed there and took part in the story-telling sessions [pictured above ].

In the listings, on each event day itself, the licensed character(s) will be making appearances at intervals throughout the day.  It’s advisable to check with the venue hosting the character visit to find out more specific information, particularly as details may be subject to last-minute changes.

April 2: Thomas the Tank Engine and The Fat Controller will be in Telford today at a council-organised event for the local community.

April 2: Peter Rabbit, seen in the television series, is going to the Regent Arcade in Cheltenham today to see family shoppers.

April 5: The Gruffalo will be visiting the Tyne & Wear Archives & Museums venue.

April 6: Royal Victoria Place in Tunbridge Wells has arranged for The Gruffalo to make personal appearances at the shopping centre.

April 6: Jones Lang LaSalle has arranged for Peppa Pig and George to make appearances at Captain Cook Square in Middlesbrough alongside a Peppa Treasure Hunt activity around the shopping centre.

April 7: Bing & Flop are heading to the Pyramids shopping centre.

April 7: Visitors to Adventure Wonderland in Bournemouth will have an opportunity to see Raph and Leo from the Teenage Mutant Ninja Turtles today.

April 8: Chase and Marshall from TV series, Paw Patrol, will be making personal appearances at The Mall in Luton.

April 9: St. Helens Council has organised a visit from Chase and Marshall from Paw Patrol.

April 9 & 10: TV Peter Rabbit is taking part in story-time sessions led by a narrator, during his visit to Sterling Mills Outlet Shopping Village, near Stirling in Scotland.

April 10: Small from the Clangers heads to Hamleys on London’s Regent Street, organised by Coolabi.

April 14, 15 & 16: On behalf of DHX Media, Rainbow Productions is managing the appearances of Tinky-Winky and Laa Laa from the Teletubbies in Athens, connected with the launch in Greece.

April 17: The St. Enoch Shopping Centre in Glasgow has arranged a visit from Postman Pat® and Jess the Cat.

April 17: The Gruffalo is joining race-goers today at Wincanton Racecourse in Somerset.

April 23 & 24: Bing and Flop are going to Hatton Country World to greet guests at this attraction.

April 24: Peppa Pig is all set to see visitors today during her visit to Woburn Safari Park in Bedfordshire.

April 30: Paw Patrol characters Chase and Marshall are going to the Merrion Centre in Leeds.

April 30: Today is the first day of Peppa Pig and George’s three day visit to the Great Central Railway in Leicester; the characters are visiting until May 2.