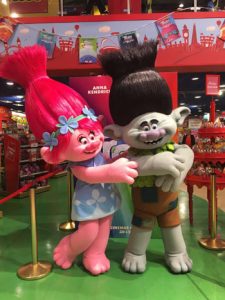 The summer holidays may be over but that certainly doesn’t mean our Licensed Character appearances have slowed down! We’re gearing up for Half-Term at the end of October, with activities in the pipeline including PAW Patrol visits to retail and shopping centres on behalf of Spin Master Toys.

The annual Brand Licensing Europe (BLE) exhibition is also just around the corner. To date we have over sixty characters appearing over the three days, with over fifty of those appearing on the opening day and taking part in the now legendary Character Parade. Among these famous licensed properties, keep an eye out for characters on the show floor such as Skye from PAW Patrol, the Teletubbies, the Twirlywoos, PJ Masks and Virgil from the Thunderbirds. BLE will see brand owners, agents, licensee partners and retailers all coming together to find out plans for current properties, plus new brands from the world of children’s entertainment, lifestyle licensing, sports branding and more.

In October film characters Junior and Pigeon will attend a Gala Screening of Storks in Leicester Square for Times subscribers. Other character appearances taking place this month in support film releases include Poppy and Branch visiting Hamleys Lakeside on October 1st, Hamleys Regent Street on October 2nd plus Alton Towers Resort on October 27th, as part of a promotional tour for The Trolls movie release.

For an idea of other character appearances scheduled for October please check out listings, below. All bookings are subject to change.