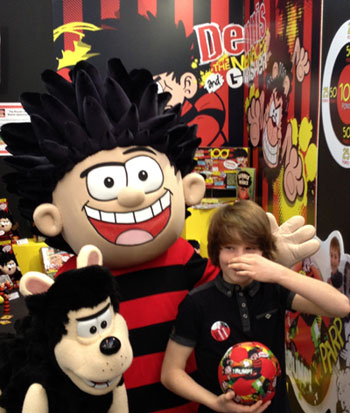 Dennis the Menace at Toy Fair 2014

The 61st Toy Fair trade exhibition opened its doors at Kensington Olympia at 9am on Tuesday 21st January.  The toy show provides an opportunity for established as well as newer toy companies to showcase to a retail, media and toy industry audience thousands of brand new toys, games and hobbies.

The opening day of the three day exhibition provides a key opportunity for brands owners and licensing partners to present their products to the media.  As part of the media push, the opening day at Toy Fair also involves the presence of licensed children’s characters.  These characters are seen making personal appearances on the show floor and at media photo calls on specific exhibitor stands as a way of helping promote the brand and associated toy lines.

For the 2014 edition of Toy Fair, Rainbow Productions managed the presence of twenty six licensed characters, ensuring these brands formed part of the annual parade and photo shoot at 11am. Several children’s properties were also present at the Toy Fair on January 22nd and 23rd.

Q Pootle 5 was pictured with creator Nick Butterworth at the Jumbo Games exhibition stand.  While Postman Pat® and Jess the Cat headed to the Character Options to deliver a golden envelope containing tickets to attend the premiere of the Postman Pat movie which is released in May.