A Summer Full of Character! 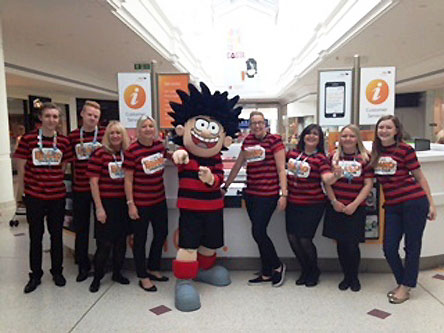 With the school summer holidays in full swing, our licensed characters can be seen making personal appearances, attending narration events and taking part in mini shows at venues across the country this month.

Two of the latest signings to the company’s portfolio of children’s characters managed under licence are Bing and Flop, from BAFTA-nominated television series, Bing. The duo will be making appearances this month from August 8th to 10th at Animal Farm Adventure Park in Somerset – with further UK appearances in the pipeline.

Dennis the Menace is also keeping out of too much mischief this month with personal appearances continuing in August at Brewers Fayre restaurants.

A selection of character appearances scheduled for August is listed, below.  Note that locations and dates are subject to last-minute changes. It is always advisable to confirm details directly with host venues.

August 1: Fifi and Bumble will take part in a Mini Show at an event in Chorley on behalf of the Council.

August 3: Meadowhall Shopping Centre in Sheffield is hosting a visit by Captain barnacles and Kwazii from the Octonauts.

August 4: Fireman Sam and Norman are going to the Yate Shopping Centre in Bristol.

August 5: Finkley Down Farm in Andover will host a visit from Leo and Raph from the Teenage Mutant Ninja Turtles.

August 6: Peppa Pig is going to Wheelgate Park in Mansfield.

August 6: Leo, Raph, Mikey and Donnie are all heading to the Clacton Factory Outlet.

August 6: Shaun the Sheep will be going to Angel Place in Bridgwater today.

August 6: The Broadwalk Centre in Edgware will host Yojojo from Waybuloo.

August 7: Mike the Knight will be present at Lingfield Park Racecourse.

August 8: Peppa Pig will be making appearances in store at John Lewis on Oxford Street, London.

August 8: The Merrion Centre in Leeds will receive a visit from Teenage Mutant Ninja Turtles Leo and Raph.

August 9: Katsuma and Poppet from the Moshi Monsters will be visiting Windsor Racecourse.

August 10: Thomas the Tank Engine and The Fat Controller are both heading to Meadowhall shopping centre in Sheffield.

August 14: The Old George Mall in Salisbury will receive a visit from Shaun the Sheep.

August 15: Paddington is going to Newmarket Racecourse to see racegoers.

August 18: Raph and Leo are going to Drusillas Zoo Park to see guests.

August 19: Peppa Pig and George are visiting the Botanical Gardens in Bristol.

August 20: Tree Fu Tom is going to the Kingfisher Shopping Centre in Redditch.

August 22 & 23: Mike the Knight gallops towards Lincoln Castle this weekend.

August 22: The Gruffalo is going to the White Lion Walk in Guildford.

August 22: Paddington will be seeing children at Busy Bees Nursery in Southampton.

August 23: The National Railway Museum in Shildon will host a visit from Little Charley Bear.

August 26: Ben and Holly from Ben and Holly’s Little Kingdom will be out and about today at Cantref Adventure Farm in Brecon.

August 26: West Quay shopping centre in Southampton will be hosting a story-telling event which includes complementary appearances by Paddington.

August 28: A Ben and Holly Narration event takes place at The Oracle in Reading.

August 29: Oakwood Theme Park in Pembrokeshire welcomes Thomas the Tank Engine and The Fat Controller into the park today.

August 29: Peppa Pig will be joined by mummy Pig, Daddy Pig and George for meet and greet personal appearances taking place at the Harvey Centre, Harlow in Essex.

August 29: Wallace and Gromit are going to the Broadwalk shopping centre in Bristol.

August 29 & 30: The Coliseum Leisure Park in Ellesmere Port has arranged a visit from Fireman Sam.

August 29 & 30: The Victorious Festival in Southsea will host Captain Barnacles and Kwazii mini shows; plus separate personal appearances this weekend by Peppa Pig.

August 30: Today Dora will also be at the Victorious Festival in Southsea.

August 30: Rand Farm Park in Lincoln has arranged for Peppa Pig to visit the park and see their visitors.

August 31: Bressingham Steam and Gardens in Norfolk is hosting a visit from Postman Pat.

August 31: Mattel has arranged for Fireman Sam to make appearances in store at Hamley’s on Regent Street, London.

August 31: Buddy from Dinosaur Train will visit The Cornmill Centre in Darlington today for appearances alongside story-telling sessions.

August 31: Epsom Downs Racecourse is the venue for Ben and Holly personal appearances and narrations today.