A successful summer of character events – with more activities scheduled for September! 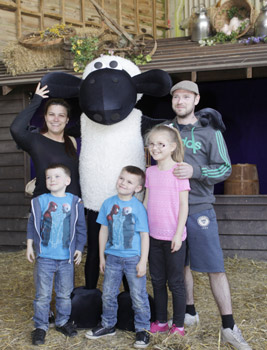 Over the school holidays famous children’s characters have been busy entertaining families across the UK.

Dennis the Menace made lots of mischief during his visits to intu Shopping Centres as part of The Beano brand activation aimed at engaging with children this summer.

Acamar’s Bing and Flop made their debut personal appearance in front of lots of excited young fans.

A number of character mini shows and story-telling sessions took place.  For example, Fifi and Bumble visited Chorley and performed their mini show with a narrator.

The start of September follows a busy Bank Holiday Weekend of interactive character experiences. Licensed characters attended the Victorious Festival on Southsea Seafront as well as The Big Feastival -presented by Jamie Oliver and Alex James and hosted at the latter’s farm in Kingham in The Cotswolds.

Although the end of the school summer holidays is fast approaching, there are still plenty of opportunities for members of the public to see famous characters out and about this September.

As ever with the selection of events listed, below, the dates and location are subject to last-minute changes and it is recommended that details are confirmed directly with host venues.

September 1: Paddington™ will be going to Pontins Pakefield Holiday Park in Suffolk.

September 3: Today licensed characters are going to another two Pontins’ Holiday Parks: Peppa and George will be at Prestatyn Sands in north Wales, while Paddington heads to Pontins Camber Sands in Sussex.

September 5: Rainbow Productions is managing the personal appearances of Ruckley, on behalf of the RFU, at the England versus Ireland rugby game.

September 5: Mattel has organised for Fireman Sam to make a number of retail appearances, starting today at Smyths in Bournemouth.  Additional host venues include various Hamleys’ stores across the UK.

September 6: Ben and Holly from Ben and Holly’s Little Kingdom are going to Fontwell Park Racecourse in West Sussex.

September 12: Busy Bees Nursery in Milton Keynes will receive a visit from The Gruffalo.

September 12 & 13: Peppa Pig will be meeting guests at The London Museum of Water & Steam in Brentford this weekend.

September 19: Katsuma and Poppet from the Moshi Monsters are going to West Somerset Railway, Minehead.

September 19: The Big Heart of Merthyr Tydfil, a BID collective of business and organisations, has arranged for Paddington to make appearances in the town centre.

September 19: Chorley Council has organised a visit from The Gruffalo.

September 19 & 20: Captain Barnacles will be attending the Great British Beach Clean; he’ll be at Stokes Bay in Hampshire on the 19th and then Ovingdean beach on the 20th.

September 19 & 20: Shaun the Sheep will be present at various terminals within London Heathrow Airport today.

September 26: Postman Pat will be in Bromley town centre; Sid from Ice Age will also be making separate personal appearances.